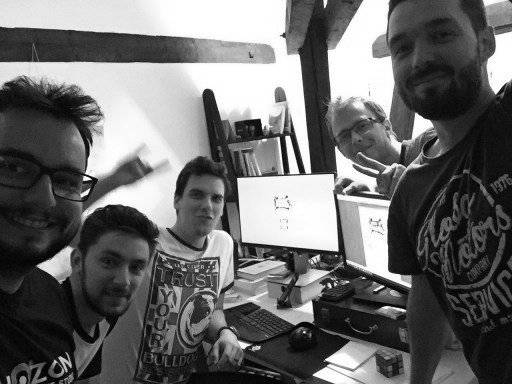 It Begins with a Dare. Ludum Dare.

Testing… is this thing on?

Hi, I’m Alex. I quit my job three months ago to found an indie game studio in Cluj-Napoca, Romania. That’s in the heart of Transylvania for those of you who aren’t familiar with the area.

And so the journey of Rikodu begins. Games will be designed, art and sound will be conjured from the ether, code will be crafted (then thrown away and crafted again) and ink will be spilled to tell you this unfolding story. Will it be a good one? Will it be long, wild and interesting? Will it have unexpected twists, stories of tragedy and triumph? Nobody knows, but every story has a beginning so let’s get this one started.

Enter the experimental age. In this time I cut my teeth on game design, I look for friends to join me on this journey and I start playing around with concepts in search of The One Concept To Rule Them All which will eventually become a complete game.

About a month ago, April 15th to be exact, I heard that Ludum Dare 35, the biggest game jam in the world was taking place. Perfect opportunity to get together with like-minded people and see what we can create in 72 hours. And so the team got together and it was a good one. We really lucked out with the team composition because it turned out to be a great mix of skills. So let’s meet everyone:

We got together on Saturday morning 9 AM  (GMT+2). The place: Rikodu Attic.

The theme was Shapeshift so we started brainstorming a game around that idea. We ended up making Second Hand: Frankie’s Revenge , a game about a robot assembled from different parts who is trying to survive the horrors of the Junkyard. The goal is simply to survive the increasingly difficult waves of enemies coming at you.

The player starts as a rolling barrel (bear with me here) and can pick up parts from the junkyard to graft on their body or replace an existing part. So you can end up with a giant fridge, zooming around on top of a Roomba, with a TV for a head and wielding two chainsaws to wreak havoc. We wanted to find a fun idea that was close to the Ludum Dare theme of Shapeshift but with a bit of a twist. I’m happy with what we came up with.

And so the game was on! After working 51 of the 72 hours we submitted Second Hand a mere 20 minutes before the deadline. It turns out that you’re allowed to submit small patches after the deadline (both a good and a bad thing – more on this later) so we fixed some glaring issues and submitted two patches right after.

Once the adrenalin passed and we got some much needed sleep, it was time to play some games! There’s a three week voting phase you see and the whole team got into the habit of playing and rating games each day. Seeing other people’s wild, crazy ideas is creative fuel of the best kind and we drank our fill.

Three weeks passed fast and on May 9th I posted this little screenshot to our Slack channel.

Alright! Top 100 in the fun category and almost top 100 for innovation. With more than 2,700 entries in the contest, we were elated with the results, especially since this was our first Ludum Dare. Nikos, our Illustrious Bard was a little sad that the public didn’t enjoy the dark ambiental music and funky sounds as much as the rest of the game but we were still in the top 15% rated games for Audio.

So how did this go and what lessons did we learn? Let’s dive in!

Constraints are the fuel of creativity

Inspiration. Imagination. Creativity. How to get inspired is a question that’s plagued many a creator or entrepreneur. “If only I had a great product (game) idea!”, or so the saying goes. Interestingly enough, having too much freedom is a problem for many endeavors and can be a problem for creative projects too. In the latter case you start with a blank slate, you can do anything and therefore can’t come up with anything.

How to get past it? Bring some constraints to the table. Let’s compare two challenges and see which one you think is more manageable:

Now, there’s no mention anywhere about how easy or hard this is, merely that it’s easier to start when you have more constraints. My personal explanation as to why that is has to do with one aspect of how our brains function. The human brain is wired to enjoy problem solving; you actually get a little kick whenever you overcome a problem. This is a fundamental driver of human evolution. My wildly speculative theory is that when problems are too general (e.g. the first challenge) the brain doesn’t quite recognize them as problems but when you add some constraints it gets to work and starts doing what it enjoys: looking for ways around them.

Taking off my amateur psychologist hat, how does this all relate to the Ludum? Well, because Ludum Dare is a game jam and it has the typical jam format, it makes brainstorming easy. Even if you think you’re the kind of person who isn’t very good at coming up with ideas, you’ll be surprised. Here’s what we came up with in very short order:

Now, these are just the one-line descriptions we used when we listed the ideas. After all, “shapeshifting gun” doesn’t say too much and couldn’t really be called an idea. Take my word for it though, each of these was pitched internally by whoever came up with it and there was much more detail to them. We then had to debate, detail, filter and argue some more before finally settling on the concept. Sum it all up with a 2.5 page design document – I strongly support having one even when you’re just jammin’ – and we had our starting point.

Team Rikodu being artistic in black and white

The constraints helped us many more times during production as we had to cut, adapt and reprioritize features. It forced us to find creative solutions in order to stay true to our concept while still staying within the time and theme constraints we had. Lesson learned: when you’re feeling at a loss on how to advance, add some constraints.

Before we even got to brainstorming, I wanted to get organized. Spreadsheet time!

Having a plan was going to be crucial because game jams are all about having something playable when the time runs out. Every experienced jammer will tell you that time management is one of the most important skills you need to exercise during a jam, lest you risk ending up with a half-finished, unplayable mess.

I did my best to keep things organized throughout the three days. Production never goes completely according to plan but having a plan really pays off when things start going off track. If you’ve laid out a path you can easily see when you’re starting to stray. You’ll quickly realize if (or rather when) you’re falling behind instead of taking hours chasing after a target that you have no chance of hitting. And when you do run off track you can adjust course or redefine the target to something that’s achievable under the current conditions.

Ready to start the morning

Throughout production we used the following tools and documents:

In the end we were able to deliver a playable game that communicated the concept well. It was a lot different than what we described in the original production plan, but that’s to be expected. I’d say that from a delivery standpoint our 51 hour, caffeine-guzzling marathon was a success!

Core lesson here: Having a plan that’s valid at the present time is extremely important. It allows you to be agile and react to changing circumstances, but only if you take the time to update and consult it regularly. Don’t be afraid of change though and don’t try to rigidly stick to the plan.

It’s hard to describe the atmosphere and feeling of camaraderie that developed over the three days. Bear in mind that the five of us had never worked together as a team before and some of us barely knew each other. Under these circumstances, I wouldn’t have been surprised if five people had gone in, only for three beastmen to come out at the end, blood-soaked and frothing at the mouth. Okay, maybe I’m exaggerating a bit, but you get my point.

It turns out that when you take a group of people with a common goal, who have a shared love for something (games!) and let them all express themselves and contribute in a positive manner, good things happen.

Game design for Second Hand was a shared responsibility. There was no Master Designer and I resisted my Overlord inclination to make room for great team work. Now I’m not saying anyone should ditch their game designer and just spread the job around. I strongly support having clear responsibilities and utilizing every team member’s core strengths – more on this topic some other time – but I also think it’s important to be open and let everyone have their say about anything. When you do this, it becomes easier for people to buy into the vision. It creates a shared sense of ownership and when that happens you will see that tired cliche in action: a team creating much more together than the sum of all individual members’ work.

I think this happened for our game. Everyone was really passionate about it and we all poured our hearts into it. When we left home late into the night to catch some sleep, we were exhausted but still thinking about what to do next. I was dreaming code, spreadsheets and source control.

So is there a downside to this shared vision crack? Maybe the occasional lack of perspective. Like say, when Radu and I decided, after 19 hours of nonstop work and after submitting our Ludum Dare entry, that “Hey, we really should fix these last couple of issues and get some more enemies in there. Let’s make a quick 1.0.1 patch and submit that!” Does this sound sane to you? It sure doesn’t to me but when you’re high on adrenalin and your brain is on standby this is a wonderful idea.

So off we went, wrote patch 1.0.1, happily submitted it and went to sleep. Then when I woke up next morning I found that we had made the game essentially unplayable (it worked on my machine!) so I furiously coded 1.0.2 which is the final version on the Ludum Dare website.

Lessons learned? Shared vision creates shared ownership and this makes everyone work at their best. Also, don’t submit day-zero patches at 5 AM after 19 hours of work.

Second Hand was our first Ludum Dare entry but we like the project so much that we’ve decided to take it further. We’ll be writing about it in the weeks and months to come. Ludum Dare was an amazing, thrilling, adrenalin-packed rush but this story is only beginning.