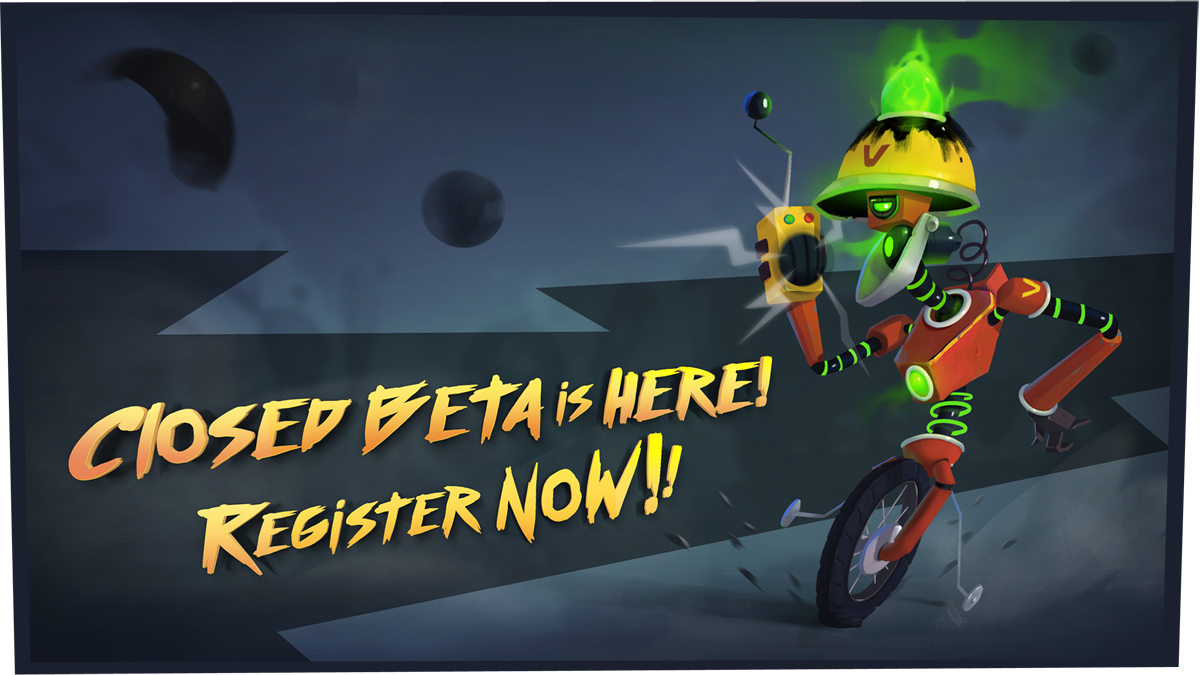 It’s finally here! We are taking registrations for the closed beta which is just a few short weeks away. Head on over to https://www.frankiesrevenge.com/beta and sign up now! If you’re already on our mailing list, you should still sign up to make sure you get an invite.

This has been a long time coming but we are finally ready. The beta starts in early March (first or second week, depending on how fast we can squash the remaining bugs) and will be running for a few weeks.

For the past 6 months or so we’ve spent a lot of time building new levels and tuning world mechanics. We also put a ton of work in online support, since our standards were set pretty high. Our goal was to make finding matches & playing online super easy and seamless. I think we nailed it and I even heard someone say that our online matchmaking is more streamlined than PUBGs but.. you know, that’s just hearsay. You can read more about it on our Steam page announcement.

With online implementation out of the way, we’ve been busy squashing bugs, adding more parts and enemies and just generally polishing things. There are two new guns, two new enemies and more on the way before the beta ships! I really can’t tell you how excited the whole team is to finally be here. So register for the Beta, get on Discord and join us for the latest leg of this journey! 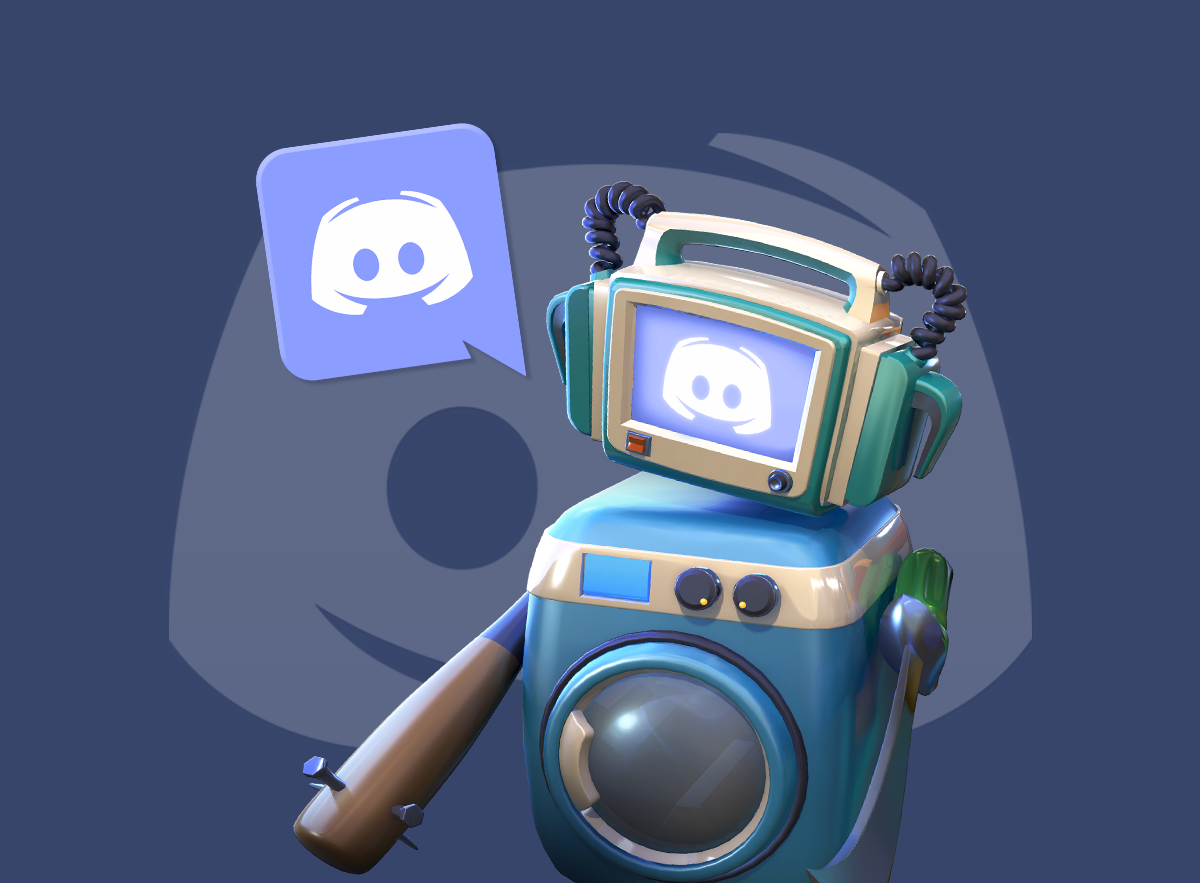 By Alexandru Palade | Announcements | No Comments

Hello lovers of fridges and chainsaws. I bring you great news!

(1) We just launched our Discord server! Join it and you’ll practically be a VIP over night, with direct access to the entire dev team and all the latest doodads we’re adding to the game. We’ve been adding lots of parts, enemies and levels and can’t wait to see what you think.

(2) Since we’re getting close to release, it was time for Frankie to get him own website. Check it out at https://www.frankiesrevenge.com/ and let me know what you think in the comments below.

There’s one more piece of news coming up really soon but I won’t spoil it just yet. 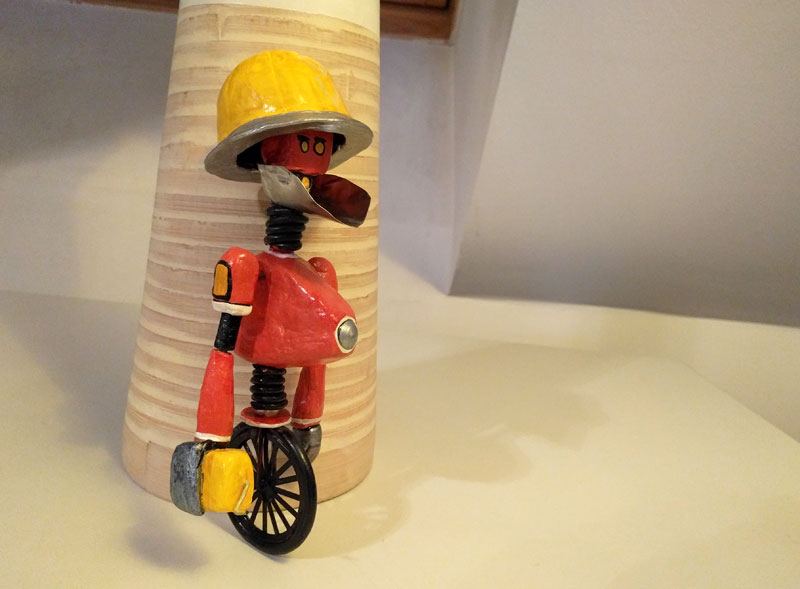 Time flies when you’re having fun and 2017 totally flew by. I haven’t done a great job at updating this blog but this all changes TODAY. You know, in the spirit of all good new year’s resomolutions.

First things first. What the hell have we been up? Well, since I haven’t posted in a while and I don’t want to make this a behemoth of a post, I’m going to conveniently itemize the most important points.

Definitely not hiding behind a vase like this guy.

Alright enough about that. I promised to talk about 2018 so let’s dig into that. First off, some great news. Radu just started working on Frankie full time! That’s great news because our programming backlog was really starting to go down the drain and Radu’s arrival is not unlike a knight’s timely intervention in regards to damsels and their state of affairs.

Second, we gathered our resources and upgraded our studio to Level 3. Here’s a photo of Dragos working hard while Radu gazes ponderously into his screen: 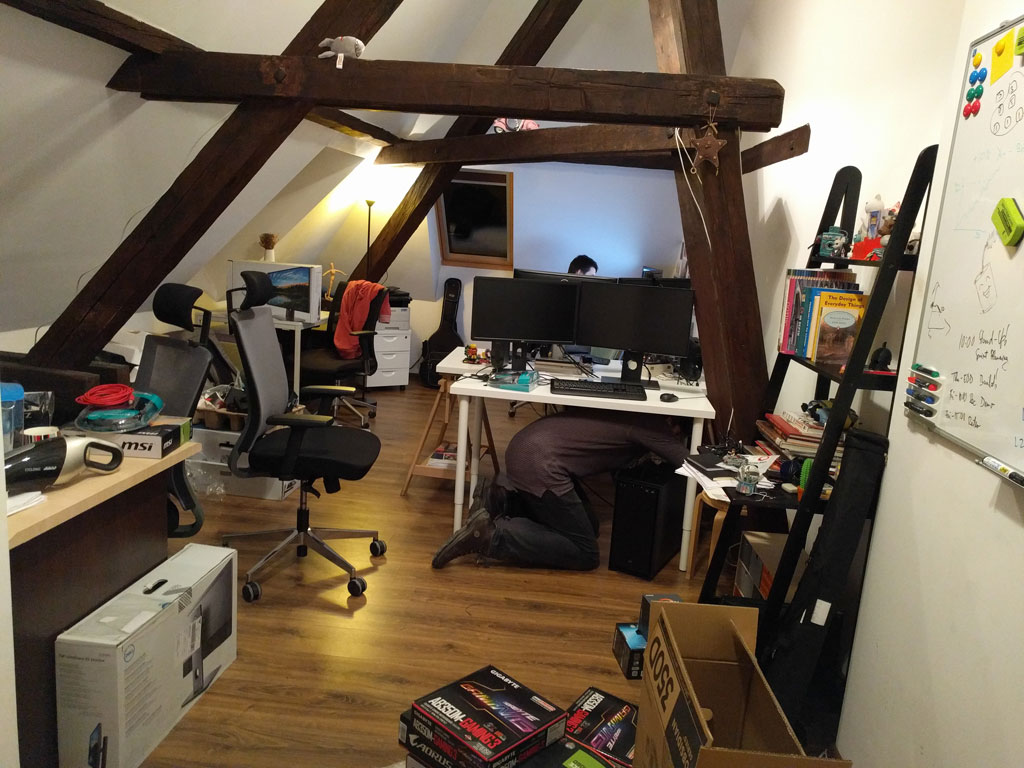 Boxes have taken residence in the studio and are refusing to leave.

Most importantly though, we’ve done a lot of planning and design work and I’m happy to say that WE HAVE A PLAN! It’s not the first one mind you but what’s new about it is that it stretches out until release. In other words, we’re starting to see a glimmer of the light waiting at the end of the development tunnel, although there’s still some way to go. Here’s our schedule, in a nutshell:

Dates, you ask? Don’t be rude! Well ok, I can tell you that this is all happening in 2018 and I hope we can run the alpha sometime in February-March. We’re going to need your help to spread the word so a tip of the hat to you if you’d be so kind to subscribe to our newsletter and help out when the time comes: http://eepurl.com/b0H5v6

To sum up, Team Rikodu is starting 2018 with big plans, lots of energy, and a desire to do better at keeping our community in the loop. And it’s on this point that I’ll make the final announcement: we’re going to start recording and sharing our internal bi-weekly demos. Think of it as a sort of dev diary. We’re going to release these videos on our YouTube channel regularly, starting in a few weeks. 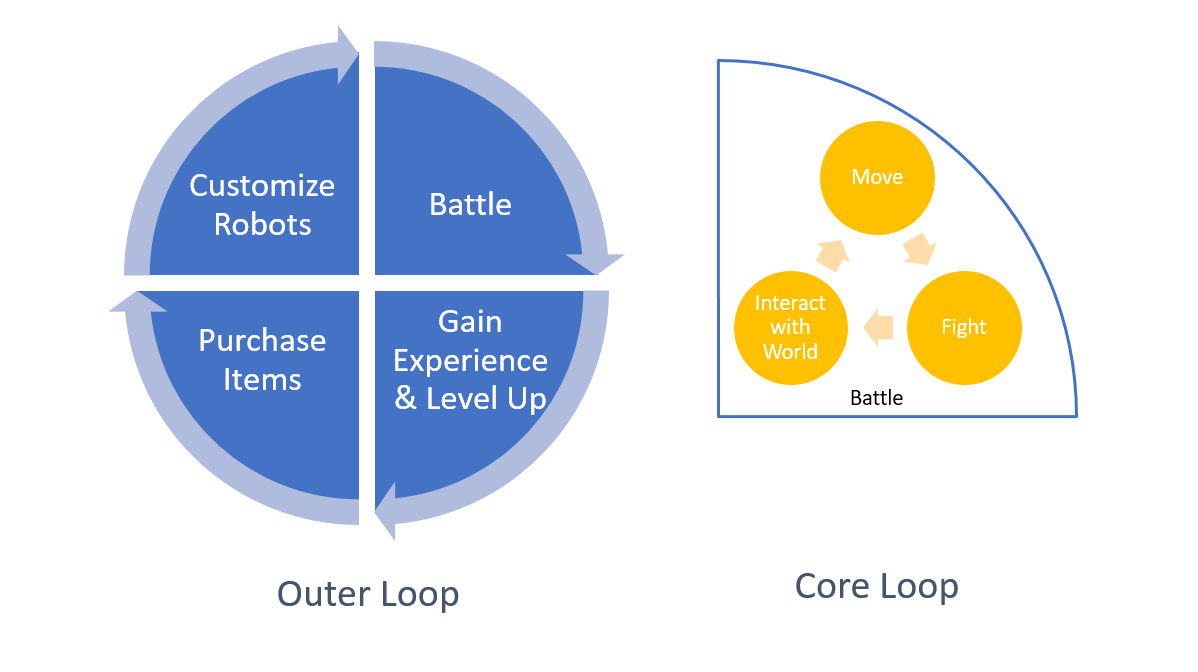 Getting ready for Reboot Develop. Meanwhile speaking at CodeCamp in Cluj.

Nope, we’re not dead. We just have to pick our battles and make hard decisions about where to spend our time. This blog doesn’t win that contest very often so follow our Facebook page if you’re hungry for regular updates. Still, we’re committed to posting major updates and interesting stuff here even if the frequency is lower than we’d like.

So here’s the deal. We’ve been super, duper busy since Casual Connect adding the next big system: robot customization and player progression. Now, I know this may not sound like much but it is in fact a HUGE addition. It’s basically the part of the game that will form… *drumroll*… THE OUTER LOOOOOP! If you’re not a game designer you may not have heard about this so let me explain with a quick diagram: 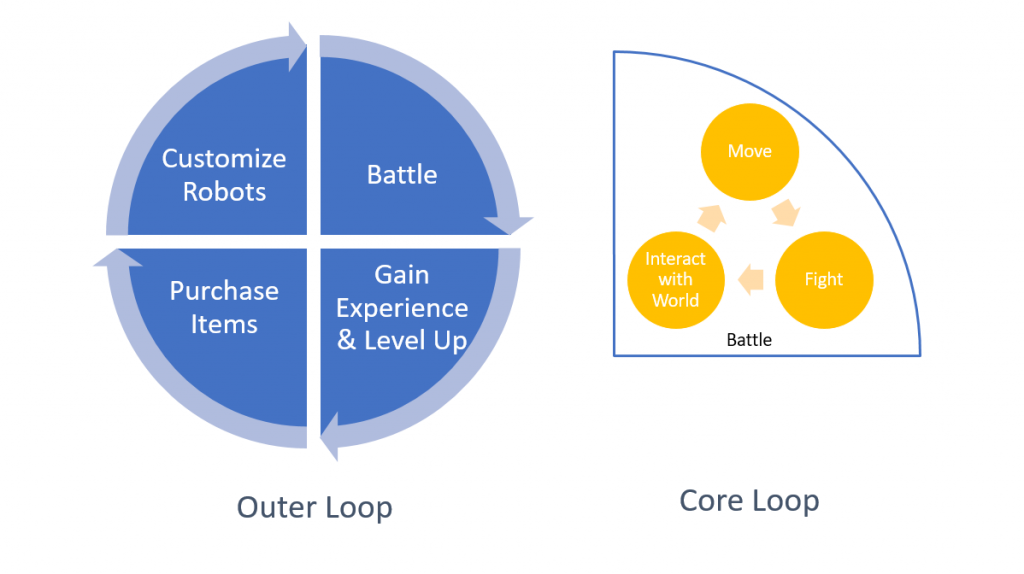 Until February we’ve focused entirely on the “Core Loop”. It defines the sequence of actions that the players will keep doing over and over, most of the time that they’re in the game. It’s what makes a game enjoyable at a micro-level. As the name implies, it’s really important to get the Core Loop right, lest you risk getting into a mode I fondly call “polishing the turd”. That’s when you add a bunch of sprinkles and other pretty things on top of a ‘meh’ core. And that’s just sad.

Post-Casual Connect we evaluated all the feedback and we think we’ve got the core loop right! The minute to minute combat is enjoyable; players like the world, the characters, the way the controls feel and they find the combat satisfying. Job well done! Let’s pop the champagne and wait for the money to start flowing in! As you might have guessed by now, we’re not quite there yet. See, while the minute to minute experience is interesting, there’s not enough in the game to get players wanting to come back. So here we are, working hard on the Outer Loop to give players long-term goals and keep them interested after playing.

This is more of a teaser but I’m going to write up a longer article talking about how we tackle these things after we’re back from Reboot.

Speaking of which, here’s what’s happening next for us:

That is all. Enjoy the finicky spring weather. 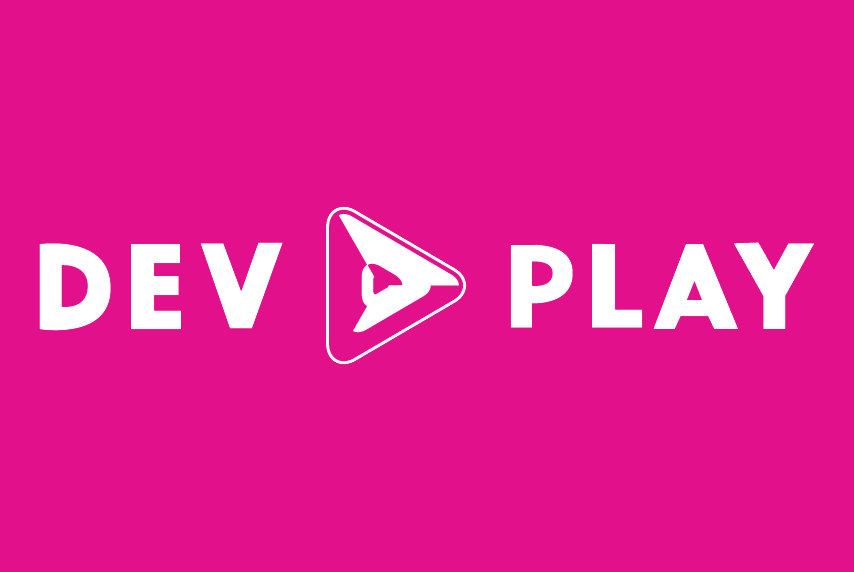 Second Hand will be at Dev-Play!

By Alexandru Palade | Announcements | No Comments

We are super excited to bring Second Hand to Dev-Play, the first Romanian conference about game development!

It’s been awfully quiet around here lately but that’s not for lack of activity. We have in fact been super busy getting a playable build ready for the conference. Rikodu is one of 6 studios who will present their ideas at the Dev-Play Indie Pitch so if you’re attending I hope you drop by to see it. We’re also going to have a booth where you can try the game out and meet some of the devs so don’t be shy, come by and say hi! That rhyme was accidental and I apologize for any damage it may have caused.

Now, back to stuffing more things into the game at the last minute.